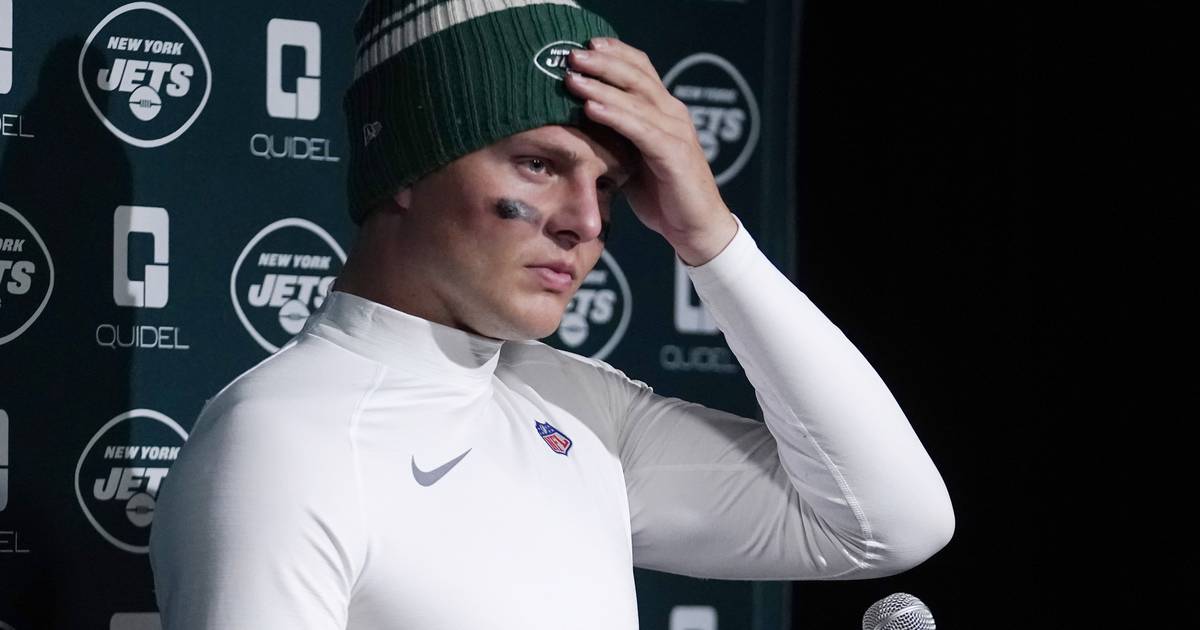 It has been a rollercoaster 72 hours for Jets quarterback Zach Wilson.

Following the Jets 10-3 loss to the Patriots on Sunday, Wilson failed to take any responsibility for the team’s lack of offensive output in the postgame press conference. Then the next day, Jets coach Robert Saleh said he was considering a change at the starting quarterback position.

When the Jets entered the facility Wednesday morning, Saleh made the move official as the team will start Mike White against the Bears on Sunday. Not only will Wilson not start against the Bears, but he won’t even be active as Joe Flacco, who started three games this season, will be White’s backup.

“I wouldn’t necessarily say surprised because I haven’t been doing my job,” Wilson told reporters. “Of course, I would like to not agree with the decision and everything, but it comes down to I got to play better.

Although Saleh said Wilson didn’t lose his job because of his failure to take any accountability after the loss to the Patriots, it certainly didn’t help. After the game, Wilson was asked whether he felt like he let the defense down at all and his response was “no, no” after completing 9 of 22 passes for 77 yards and zero touchdowns.

While publicly, his teammates have voiced support for Wilson, on Twitter, defensive end John Franklin-Myers and cornerback Ahmad “Sauce” Gardner both liked tweets that were critical of the second-year quarterback’s comment. Both Franklin-Myers and Gardner said they liked the tweets by accident.

Then it was Garrett Wilson’s comments after the Patriots game when he said the “sh-t is not OK” and “that sh-t is not going to fly” when talking about the offense. Saleh himself was also critical when he said the Jets offensive performance, in which they gained only 103 yards and two yards after halftime, was “dog sh-t.”

Wilson addressed the team about his comments on Wednesday, but he wasn’t specific about what was said.

“I didn’t realize what I said,” Wilson said. “I let my emotions get the best of me.

“It almost took until a little bit after when we were getting ready and leaving, and my Pops gave me a call and said, ‘Bro, what are you doing?’ I didn’t realize it. Can’t let the emotions get the best of me.”

The Jets selected Wilson with the number two overall pick in the 2021 NFL Draft, as he was thought to be the franchise quarterback for many years to come. But inconsistent play and injuries have been recurring throughout Wilson’s tenure with the Jets.

Last season, Wilson injured his MCL, which caused him to miss four games. Then this year, during the preseason opener against the Eagles, Wilson injured his meniscus and suffered a bone bruise after scrambling trying to make a play. He missed seven weeks and the first three games of the regular season.

“Obviously, he’s going to be frustrated,” Saleh said about Wilson. “Not going to get up and lie and say, ‘Hey, it was a party.’ He’s just got the right mindset.

“You guys talk to him every day, and you see how important this is, and sometimes he does wear it on his sleeve, but at the same time, the guy works his tail off. He works as hard as anybody. I know that we’ve got a great plan for him with regards to practice and what we’re trying to get accomplished, and I know he’ll attack it.”

With Wilson now the Jets third-string quarterback at least for this week, he will be working as the scout team quarterback. That means he will try to imitate Bears quarterback Justin Fields as the team prepares for the game.

The third-string quarterback typically doesn’t get as many reps as the first and second string as those are the two players who will be in uniform each week. The team hasn’t completely given up on Wilson just because he is no longer the starter and is not the current backup.

The hope is Wilson does return as the team’s starter at some point during this season. They’re looking at this benching as a bit of a “temporary reset” for Wilson, as they want him to improve different aspects of his game before becoming the starter once again.

“I truly believe he has the best interest in me and the team,” Wilson said about Saleh and the Jets organization. “He does an amazing job of doing that.

“I’m looking forward to the future and from this event, how I can grow as a person, as a leader, as a teammate, and being there for my guys and handling things the right way. This is going to be a good opportunity, a humbling opportunity to put my head down and work harder and just be here for this team.”