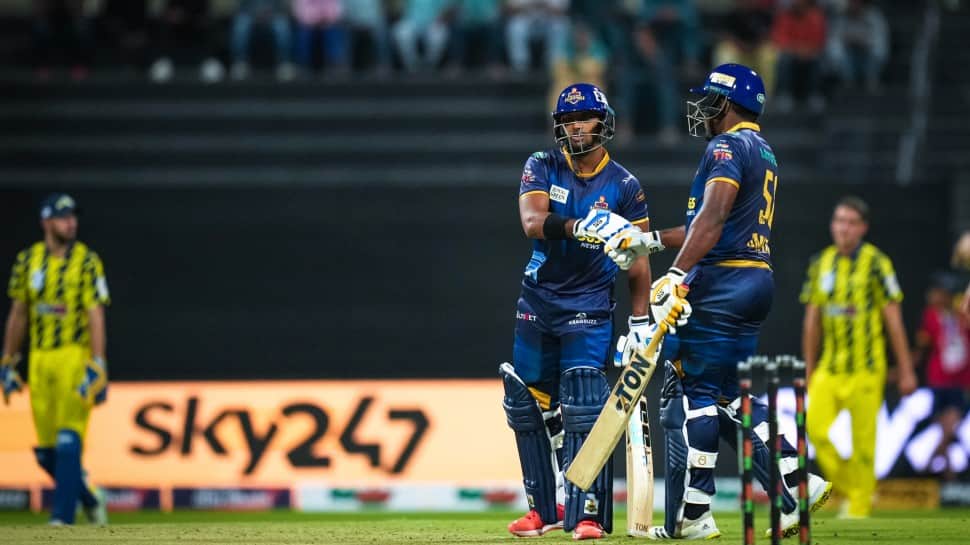 Former India and Chennai Super Kings batter Suresh Raina’s Abu Dhabi T10 League debut was a flop show as he fell for a two-ball duck but his side Deccan Gladiators got off to a winning start thanks to an explosive innings by former West Indies T20 captain Nicholas Pooran. The southpaw recently quit the West Indies captaincy after his failed to progress to the Super 12 stage in the T20 World Cup 2022 earlier this month.

Pooran cracked a breezy unbeaten 77 runs studded with eight sixes and five boundaries to give Deccan Gladiators an impressive total of 134 for 6. Team Abu Dhabi’s batting failed to rise to the challenges and got restricted to 99 for 6 in the second match of the first day of the Abu Dhabi T10 at the Abu Dhabi Zayed Cricket Stadium. Deccan Gladiators won by 35 runs.

Deccan Gladiators had won the toss and elected to bat. They lost an early wicket when Naveen Ul Haq got Will Smeed clean bowled with the second ball of the first over.  Opener Pooran began aggressively hitting Naveen Ul Haq’s fifth and sixth deliveries for sixes. In the second over, Pooran hit Andrew Tye’s fourth, fifth and sixth ball of the first over for boundaries. Tom Kohler-Cadmore, who joined Pooran, hit Mustafizur Rahman’s first delivery of the third over for a six over long-on. He also hit the second for a boundary. Eighteen runs came off Mustafizur’s over.

Hatzoglou did not let the batsmen hit any boundaries or sixes in the sixth over. Pooran could not be tied down for long and he hit Tye for two sixes in the seventh over. He reached his half century in 26 balls through a boundary off Mustafizur. The ninth over saw Pooran at his aggressive best hitting Mustafizur for three sixes and two boundaries to take 27 runs off that over. This also helped Deccan Gladiators go past the 100-run mark.  Fabian Allen who bowled the last over was hit for a six by Odean Smith, but he fell to the next ball brilliantly caught and bowled by Allen for 23. He also got Sultan Ahmed out for a duck to the next ball. In the end, Deccan Gladiators posted an impressive 134 for 6 in 10 overs.

Alex Hales, fresh from his heroics in the recent ICC T20 World Cup 2022, opened with Chris Lynn for Team Abu Dhabi. The first six of the innings came from Hales off Josh Little over deep point.  UAE’s Sultan Ahmed who bowled the second over was hit by Lynn for three boundaries. Another UAE bowler and pacer Zahoor Khan took the prize wicket of Alex Hales in the third over caught by Little at deep point for 8.  James Vince who came in began by hitting two consecutive boundaries off Zahoor.

Deccan Gladiators also got rid of Lynn in the fourth over bowled by Tabraiz Shamsi for 14. It was a brilliant over from Shamsi as he gave away just four runs and even took a wicket. James Vince lit up hopes with two sixes and a boundary off Wiese in the fifth over to take 19 runs. At the half way stage, Team Abu Dhabi were 58 for 2 needing some big hits to reach the target.

Deccan Gladiators took a firm grip on the match by the eighth over when Helm got Brandon King out with his first ball caught by Little at deep mid-wicket for 1. He too gave away just seven runs. With 50 runs needed in 12 balls, Deccan Gladiators went for the kill and restricted them to 99 for 6 in 10 overs.