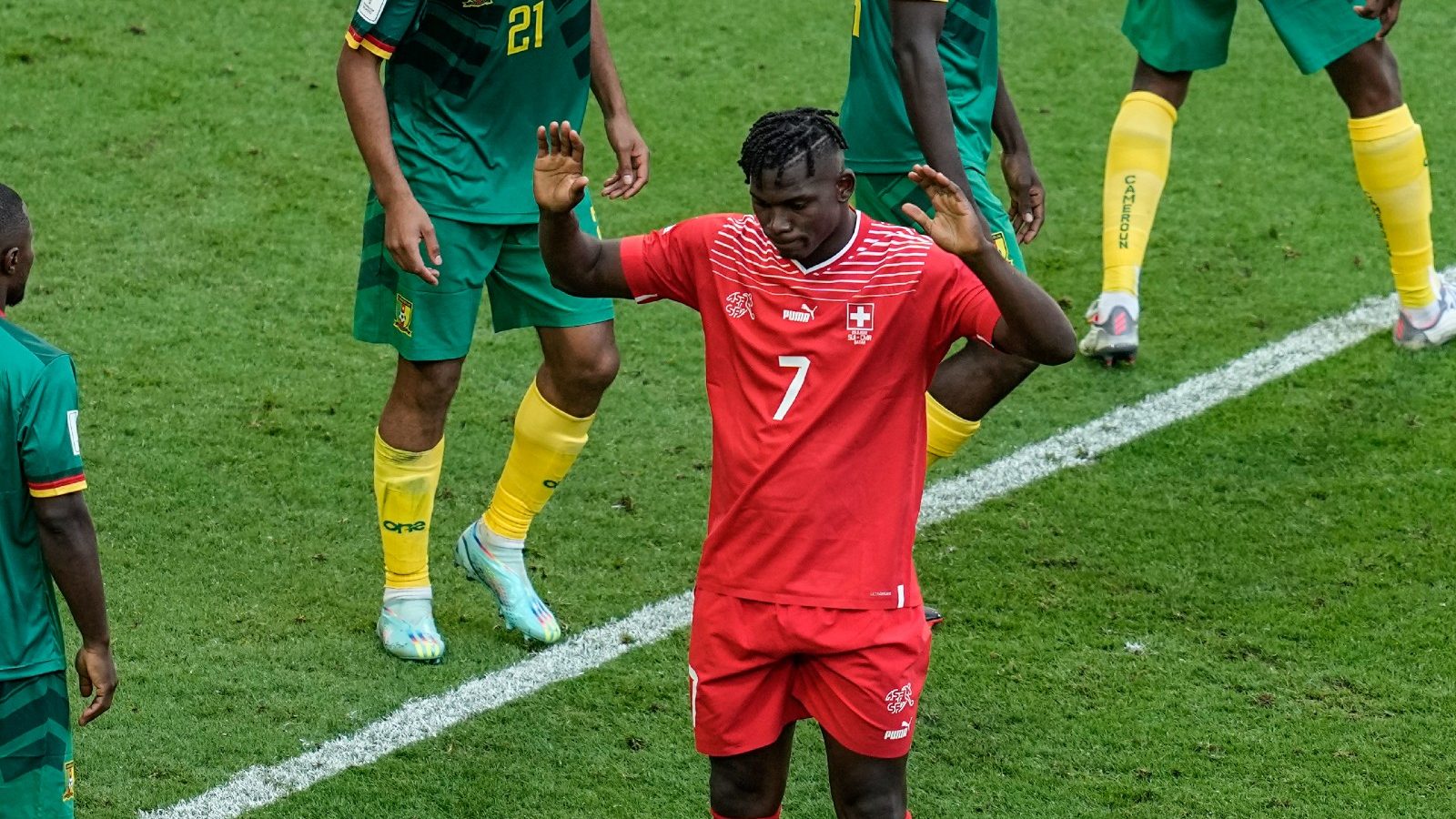 Breel Embolo’s goal lifted Switzerland to a 1-0 win over Cameroon at the World Cup on Thursday and he kept his promise not to celebrate scoring against the country where he was born.

The Swiss forward from Yaounde struck with a right-foot shot in the 48th minute, standing all alone eight meters (yards) out in the middle of the goalmouth to take Xherdan Shaqiri’s low pass.

Embolo then pursed his lips in a wry smile and held his arms out wide, before raising his hands in a gesture of apology as teammates rushed to him near the penalty spot.

He pointed toward Swiss fans behind the goal where he had scored then to Cameroon fans at the opposite corner of Al Janoub stadium.

The 25-year-old forward left Cameroon with his family when he was five. They spent time in France before settling in Switzerland, the country he is now representing at a second World Cup.

Though an African-born player scored, teams from Africa are now scoreless through the four games they have played at this World Cup. All have played higher-ranked teams, and Morocco and Tunisia earned 0-0 draws, respectively against Croatia and Denmark.

Cameroon’s streak of losses at World Cup finals tournaments extended to eight games dating back to 2002.

Brazil and Serbia are also in Group G and they meet later Thursday.

In the move for Embolo to score, it was too easy for the Swiss to pass the ball quickly through the Cameroon defensive lines from left flank to right.

The fast Swiss start to the second half contrasted with a lack of first-half urgency that could hardly be explained by the 1 p.m. kickoff — one of only seven games in Qatar being played entirely in daylight. The heat peaked at 29 Celsius (84 Fahrenheit), the humidity was low and most of the playing area was shaded.

In the next play, a Swiss move down the right flank almost repeated the goal but goalkeeper Andre Onana saved from Ruben Vargas.

Cameroon great Roger Milla was paraded on the field before the game. Fans were shown a video montage of his goals at the 1990 World Cup where Cameroon became the first African team ever to advance to the quarterfinals.

Milla was joined by Samuel Eto’o, Cameroon’s greatest player who now heads its soccer federation. Eto’o scored the only goal when Cameroon last won at the World Cup — 1-0 against Saudi Arabia in 2002.

Referee Facundo Tello had a quieter day than when he sent off 10 players in Argentina just before coming to Qatar. He showed red cards to seven Boca Juniors players and three from Racing Club after an extra-time brawl. Here, Tello showed three yellow cards and no red cards. This was the 13th game at the World Cup and no player has yet been sent off.