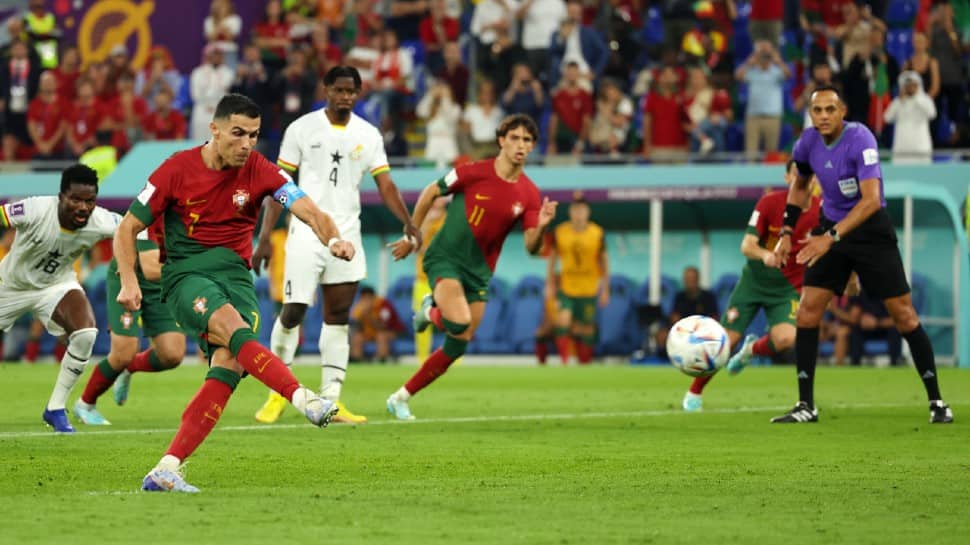 Portugal captain Cristiano Ronaldo became the first footballer to score in five different FIFA World Cups, first earning a controversial penalty and then converting it against Ghana in their Group match of the FIFA World Cup 2022 on Thursday (November 24). Ghana coach Otto Addo felt Ghana defender Mohammed Salisu didn’t foul Ronaldo for the penalty, and he complained that the officials didn’t use VAR to make sure. Salisu’s thigh appeared to make slight contact with Ronaldo’s leg before the Portugal captain went sprawling to the ground.

The penalty helped Portugal break the deadlock and, in the process, Ronaldo also became the first player in the history of world football to score goals in each of his 5 editions of the tournament, that he has played. Ronaldo’s former teammate Luis Figo was not convinced either.

During the VISA Match Centre on Sports18 and JioCinema, the two legends discussed the penalty. “For me, it did not look like a penalty but it was welcome,” said Figo.

The 37-year-old Ronaldo, who was starting what’s expected to be his last World Cup, converted the penalty for his piece of history. “I think it was really the wrong decision,” Addo said. “I don’t know why VAR didn’t come up. There’s no explanation for me. And then it’s difficult against a world-class team when they are leading.”

Addo is a 47-year-old former Ghana player who is in his first international coaching job and at his first World Cup. He said he even tried to meet with Elfath after the game to ask him about the incident. Addo also complained that Elfath had missed numerous fouls on his players.