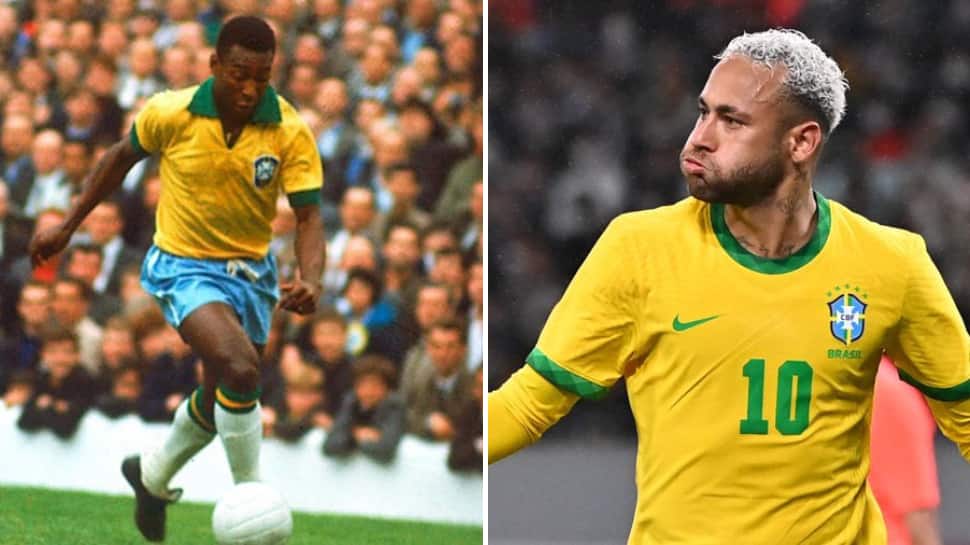 All eyes will be PSG and Brazil superstar Neymar on Friday (November 25, as per IST) as Brazil are set to open their FIFA World Cup 2022 campaign against Serbia in the fixture of Group G. The most successful nation in the history of FIFA World Cup will play their first match of the Qatar tournament at the Lusail Iconia Stadium. The 30-year-old is all set to become one of the greatest football players Brazil has had in their history as he will play his third World Cup for his country. Neymar just needs 3 more goals to overtake legendary Pele, who has 77 goals for Brazil in 92 matches comparing to Neymar’s 75 in 121 matches.

Neymar hasn’t spoken a word publicly since arriving at the World Cup. And he hasn’t had to. That’s because his intentions are clear. The Paris Saint-Germain star made sure of that when he posted a photo on social media with a sixth star photoshopped onto his shorts around Brazil’s logo during the flight to Qatar, referring to a hoped-for, record-extending sixth World Cup title for the South American team.

“This is our dream,” Brazil forward Richarlison said.

Neymar posted that photo because it’s his dream, too. He wants to win that and we know how willing he is to win that. He can do whatever he wants. It’s his dream. If Neymar is happy here, we will be happy. That’s the most important thing.

Neymar enters in good form after a series of injuries since the 2018 World Cup, when Brazil was beaten by Belgium in the quarterfinals. His only issue so far was showing up a day late to Brazil’s pre-tournament training camp in Turin, Italy, because of a problem with his flight.

Brazil coach Tite should have all of his players available for the opener. The only doubt is whether he will use midfielder Lucas Paquet? or a more attack-minded team with Vinicius Junior up front alongside Neymar.

Neymar has 75 career goals for Brazil and needs just two more to match Pele’s record. And what better place to accomplish that feat than before a global audience at soccer’s biggest event? especially for the player who Qatari-owned PSG bought for a world-record transfer fee of 222 million euros ($230 million) in 2017.

Serbia, meanwhile, is aiming to advance from the group stage for the first time in its fourth World Cup appearance as an independent nation. It has also failed to qualify for the European Championship in five tries.

Many of Serbia’s players were on the team that beat Brazil to lift the under-20 World Cup trophy in 2015; as well as a win over France in the final of the under-19 European Championship final two years earlier.

But Aleksandar Mitrovic, Sergej Milinkovic-Savic, Nemanja Maksimovic and Andrija Zivkovic, who were on those youth teams, have failed to reproduce the same success at the senior level for Serbia.

Whether Serbia has the defensive pedigree to contain Brazil’s vast array of forwards is a different matter. Brazil beat Serbia 2-0 in the final group match at the 2018 World Cup. (With PTI inputs)

Oliver Martin - 3 December 2022 0
Cristiano Ronaldo said he was involved in a verbal spat with a South Korean player who criticised him for failing to leave the field...