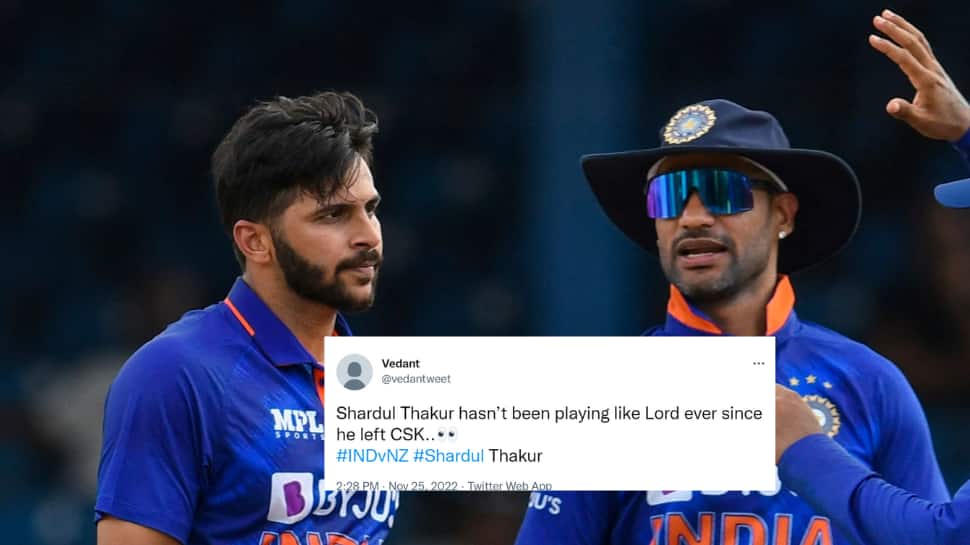 Team India bowler Shardul Thakur was brutally trolled on Twitter for his poor spell against New Zealand in the 1st ODI. Thakur had an ordinary day in the office as he misfielded once and struggled to stop boundaries in the deep. With the ball, he had big issues, unable to find the right length or extract pace off the pitch. It was the 40th over of the innings when Thakur came to bowl. Tom Latham, who was well settled, latched on to the opportunity as Thakur continued to bowl the poor lengths. Latham slapped him for one six and 4 fours respectively in that over.

What made this over worse were two wides. In total, Thakur leaked 25 runs in the over, which, sort of, took the match away from grasp of Indians. After this brutal beating on the pitch, Thakur received more blows off the field, on Twitter as well. Team India fans roasted the all-rounder with rants and memes.

Take a look below to know how Shardul Thakur was trolled on Twitter post his 25-run over:

Only lord shardul thakur can bowl a bouncer with a pace of 112 kmph with a single fielder on entire leg side.

We can never predict Lord Thakur

Either it will be us or opponents _

He was pretty good before that last over__

Shardul finished with figures of 1 for 63 in 9 overs that included 1 maiden as well. Not just him, almost all of Indian bowlers performer poorly with the ball. The top order of Team India did well. Shubman Gill, Shikhar Dhawan and Shreyas Iyer striking fifties. But none were able to convert the fifties into hundreds and hence, India struggled to get to 306/7 in 50 overs. Had Washington Sundar not played a brilliant innings to take India to a fighting total on this small ground in Auckland, India would have struggled with the ball even more.

The 2nd ODI is to be played on Sunday and Team India have two days left to make some tough calls. Playing Yuzvendra Chahal in smaller grounds was never a good decision and maybe he makes space for an additional pacer in the 2nd ODI.